Reaching your Goals with Cybernetics

I've recently been thinking about a lot about how to set, track and reach goals. Privately, as well as professionally. And I wanted to share a couple of thoughts, which just happened to come out in dialogue form. So here we go.

Why do you want to go running more often?

I want to be a better runner.

Why do you want to be a better runner?

So I can run a Marathon.

Why do you want to run a Marathon?

Because it would be a great achievement that I can look back to for the rest of my life. I will be able to tell my children and grandchildren about it.

Sound like running a Marathon is your real goal.

Isn't that too big? They always say you should start small.

Yes, start small but dream big. And telling your grandchildren about your achievement sounds like a wonderful dream.

True. I can already picture it. All of us sitting around a fire. Their eyes lighting up as I tell the story.

Perfect. This vision will be your motivation.

And how do I get there?

First you need to know where you're going. How would you know that you've reached your goal?

I would remember having run a Marathon.

Sure. But would there anything objectively different?

There would be a medal hanging on my wall over there.

Then that's gonna be your indicator that you have reached your goal?

Why do I need that?

Because "running a Marathon" could mean a lot of things. It could be that you just want to run 42km. But you want to complete an official race and get a medal for it. That's an important difference. By defining an objective indicator of whether you have reached your goal, we get the same idea of what the goal means and I can better help you reaching it.

You want to help me?

Yes! By showing you an goal-reaching method inspired by cybernetics.

Cyber-what? Not sure if that's right for me. I'm not into computer stuff.

Cybernetics is the science of controlling complex systems. It stems from the Greek word that means "to steer, navigate, or govern". It looks like this: 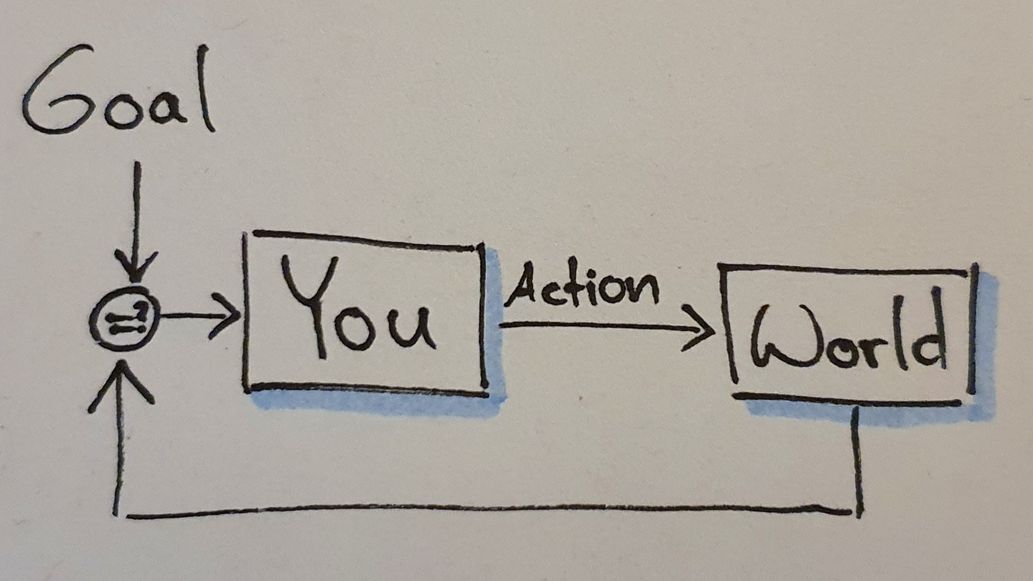 There is You and the World. And here is your Goal. To reach it you must perform some Actions that change the World into one where there is a medal hanging on that wall. That's the cybernetic loop. Perform some Action, check if you have reached your Goal, perform another Action until you reached it.

That's not at all helpful.

Because I don't need to look at my wall to know if I have run a Marathon and it doesn't tell me anything about what Actions I need to take.

That's right. But it will tell you if your Actions were successful.

But only after I have already achieved my Goal.

Exactly. And for some goals that would be enough. For small ones for example or for goals that you have already reached.

If I've already reached it, it's not a goal.

Why not? It's still a place where you want to be. And defining how to tell if you're still there is useful if you want to make sure you don't drift away.

I see. But my goal is not small and I definitely haven't reached it yet.

True. To reach it, you need to make sure you are constantly moving towards it. How could you tell if you are making progress?

If I go running every week.

How does that indicate your progress?

The more I run, the better a runner I will become.

And how much do you need to run to be able to run a Marathon?

On the day of the race, how will you know if you've run often enough?

So then the further you can run in 4 hours, the closer you will be to running a Marathon?

Yes. But why can't I just count how often I go running? I know I have to do that.

Going running every so often will probably bring you closer to running a Marathon. But we don't know how much closer. We can only guess. It's a proxy. Like the gas meter in your car. It shows that you're probably driving, but not how fast or in which direction.

But it's much less work to count my runs per week than going for a 4h run just to see how far I get.

You're right. It is much less work. That's why we will use it as well to estimate your progress. But we need to remember that it's not the real deal.

I understand. What about the other things?

Like registering for the race, buying gear, organizing transport and accomondation. That's all things I need to do so they also show that I'm making progress.

That's true. But they are even less likely to indicate real progress. So I wouldn't make them part of the Goal, and instead part of the Actions.

But doesn't every Action I take bring me closer to the Goal? That's why I'm doing them right?

Yes. But using them to measure your progress would follow a circular logic. You would complete these tasks, to get closer to your goal. But if measure your progress by how many tasks you've completed you don't gain any new information. Instead, we're gonna treat each action as an hypothesis and use our indicators to proof that the action helped with our progress.

So I can't even use the tasks as a proxy - like the number of times I go running?

We could use it as a proxy. But since we have a good, albeit expensive way of measuring your progress and already a cheaper proxy to estimate it, including these tasks would at best not help much and at worst give you a false sense of progress.

I think I understand. The tasks will bring me closer to my goal. But they don't prove that I am making progress. And maybe I do a race in my own city and don't even need transport or accomondation.

Not quite. We now have a definition of your goal. You have a vision that motivates you, and a way to compare it with the World. You can tell if you've reached it, and even how my progress you're making. All the parts are there but something is missing.

Yeah. I need to take Action and actually go through the loop.

Yes. And not only once. Consistently.

Oooh. I'm not good at consistency.

Nobody is. That's why I'll be your goal buddy.

It's someone to measure your progress for.

Someone to celebrate your wins with.

And someone who holds you accountable for your plans.

Sounds good. How about we do that every second week?

Done. I'm already looking forward to seeing that medal on your wall.

Wanna talk about it? Tweet Found typo or wanna add something? Edit me